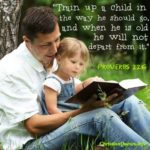 By teaching your child to be aware you can save them a lot of grief or possibly save their lives.

Do you remember when you were a kid and you ran across the street without looking?

Do you remember doing something that was dangerous and your parent asked you “Why did you do that”?

I remember many at times being stopped for running in a store, not looking where I was going and bumping into an older woman which almost caused her to trip. I was immediately asked by my mother why did you do that, you could have caused that woman to fall and she could have gotten injured.? I gave the standard answer I don’t know.

On another occasion, my mom found out that I had been the peeling wallpaper off the wall in our bedroom. What started as a small 3-inch area turned into a 10-inch area due to me constantly picking at the wall. When she confronted me and asked me why I picked at the wallpaper my response was “I don’t know”, but what I really wanted to say was I had fun doing it but feared I might get a worse punishment If I was honest.

What are some ways we can teach our children to be more aware of the effects of their actions so they can avoid the mistakes we made as kids?

After doing some research on this topic I found some great resources. The first resource I found was an article called The 4 ‘Whats’ of Negative Behavior By Keath Low

The first of the 4 WHATS is simply asking the child to identify the behavior.

As with all behavior management strategies, it is important to remember not to use the 4 WHATS when you are upset or when your child is upset.

You can read the whole article at https://www.verywellmind.com/teaching-children-with-the-4-whats-20733

By teaching our children to be more aware of their behavior, actions, consequences and how their actions affect other people around them they have the potential of carrying those new ways of being into adulthood.

I had two experiences just this evening.

The first when occurred while at the supermarket, we just purchase our groceries and were leaving the store when a man ran after a woman and grabbed her purse and said mam, mam you took something. It turned out that the lady had stolen something from the supermarket and was caught shoplifting. If the woman who was stealing knew that if enough people stole from the store and were not caught the store may have to raise their prices.

The second experience occurred while entering a parking lot there was a couple walking their dog down the middle of the driveway making it difficult for us pass them on the left or the right and after a few seconds, they slowly moved over to the right so I could pass safely but acted like I was not enough there. These are two examples of people that are not aware of how their actions affect others and if you look closely you will see many examples every day. This couple could have just as easily crossed the driveway and walked down to the store on the right and side out of the way of traffic and not cause a backup of cars in the driveway or they could have just walked on the sidewalk.

Please take these tools and examples to heart and train your children about social awareness, it may very well save them a lot of trouble in the future.

Leave a comment with some of your experiences you had with your children and the methods that had an impact on your family.