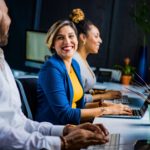 I listened to a talk on Youtube this week called the Crash course for phenomenal success by Marisa Peer. In the first part of the talk, she shared how she was taught as a therapist that the mind was very complicated but as she saw more and more people she learned that the mind was very simple but there was a very important piece missing in each of her patient’s lives. No matter what the patient’s lifestyle was like or how successful they were the piece that was missing was they did not believe they were enough.

Two of the stories that she shared with me made a big impact on me. One story was about a man who was a famous movie star who lived in a beautiful home in Beverley Hills, CA who was miserable. When she arrived at his home and he greeted her she commented on how lovely his home was and he replied: “I hate this house”. She also commented on the award he won for a filmed he starred in and he replied: “I hate receiving the  BAFTA award because once you do they expect each following film I am in to receive a BAFTA or I am not good enough”.

After a few moments of speaking with the man, Marisa said to him “I know what your problem is” and replied what is my problem? She went on to tell him that his problem was he did not think he was enough and tears began to roll down his cheek. He went on to tell her how as a child he used to cook his father dinner because his mom worked nights and he would prefer to share the leftovers with the dog than his son and all these years he had been trying to prove to himself and the world that he was enough but became depressed and miserable in the process.

Marisa gave him a prescription that would help cure him of his problem she took a lipstick and wrote on each bathroom mirror the words I AM ENOUGH. She also configured his phone to send a message to him every morning and every evening saying the words I AM ENOUGH. She asked him to say those words to himself several times a day and the results were amazing. Within a couple of weeks his attitude completely changed, he is happy now and living life more fully.

The second story she shared was even more incredible she talked about a woman who was a very successful trader in British securities who had tried to throw herself in front of a train and was now confined in a psychiatric ward of a hospital for evaluation. When Marisa came to see her she read all the notes that the hospital had on her, met with the woman and asked her “Do know what your problem is” the woman replied, “yes, I have manic depression, I’m bipolar, I’m a compulsive shopper and a hoarder”. Marissa replied, “no, you don’t think you are enough”. She went on to share with the woman how her mom killed herself right in from of the woman she was a little girl and from that moment on she never felt she was enough. Marisa gave her the same prescription as the man in the first story and even sent the woman text messages telling her that she was enough and eventually the woman was cured of her depression, was now happy and it completely changed her life.

You can listen to the talk on Youtube. https://www.youtube.com/watch?v=lw3NyUMLh7Y&t=4s

After listening to this talk I decided to do the things that Marisa suggested so that I can be the best me that I can be!

I share all this to encourage you to listen to the talk and take on the challenge of writing on each of your bathroom mirrors I AM ENOUGH and set an alarm on your phone to tell yourself every morning and every evening that you are enough. I have accepted the challenge and added the statement to my mirrors and the reminders on my phone and I will report the results in a later post.

Please leave me a comment and let me know what you thought of the talk and your results if you accepted the challenge.